Ross K Foad is  NPLH's founding figure/ leader and is a youtube partner presently signed to The Maker Studios. He is the show's main actor portraying Sherlock Holmes as well as the Script Writer/Director/Producer and Video Editor. He also produces and presents "Ross K Reviews" The Sherlock Holmes book pastiche review show. A former stand up comedian as part of double act "Chrosstopher"  Ross is a prolific writer with experience in comic book writing, health food writing, Short films and web shows. His quirky, individualistic video reviews are extremely popular and a big hit with those looking for balanced and fair reviews.


Here we go..............
Many people know you as one of the foremost reviewers of Sherlock Holmes books around. Were you interested in Holmes at an early age?
My first experience of Sherlock Holmes would have been when I was around 8 or 9 I believe, i borrowed a pastiche from a library that was about the Baker Street Irregulars and I really enjoyed it so went on to read Sir Arthur Conan Doyles Canon, there were many things that I did not quite understand at the time completely but never the less I enjoyed them. This a few years later led to me watching the Granada series with Jeremy Brett and that just enhanced the whole experience ten fold, from that moment on Brett became my voice whenever I read the canon or most other pastiches for that matter.

While still young, at 13 indeed, you wrote a comic book series for 'The Surrey Comet'. How did that opportunity arrive?
One very dull English class with a supply teacher when I was about 12 or so my  then best friend and I were doodling on a scrap of paper and he drew a series of pictures to which I decided to add speech bubbles too. It was incredibly silly but we laughed our heads off resulting in the supply teacher coming over and taking it from us and giving us a very strange look.  From that moment on we took this character and began making lots of proper 3-4 panel strips about him and his experiences in school and my Dad unbeknownst to us sent them off to "The Surrey Comet" and they really liked them and hired us to do it on a weekly basis for them.
You also formed a comedy duo and performed all over London I believe. What kind of experience was that/ Do you miss it?
I learnt an awful lot from that, it was a great deal of fun and working off the energy of a live crowd is something I miss measured against performing to camera as the reaction to whether you have done something funny or not is there in the moment and you can get instant approval..or rejection. With video I can only rely on getting the odd comment to know whether something was good or not.  A downside was during our time we were part of "The Penthouse Cabaret" which included magic,singing, comedy(us) and burlesque (ooer). We were the only act that changed our routines each time, I know we had a different audience each time so its fine to perform the same thing but from a performers perspective it was tedious watching the same magic act night in night out after a while.Did the whole 'No Place Like Holmes' thing almost come out of nowhere for you? Or was there a germ of an idea there for years?
It came from my time in the double act, because we also did sketches on youtube too and one of my ideas  back in early 2009 was indeed a one off sketch about Holmes and Watson transported to modern day. But I liked the idea so much I wanted to develop it further than that so when the double act broke up I picked it up and ran with it.
What have been the highlights of the NPLH years for you?

Wow...this is hard to answer, there have been so many. Ultimately it will have to be the people that have come into my life as a result of it which includes my cast members who I consider to be my best friends plus the ever extensive Holmes community, I am big believer in the laws of attraction and it bringing you the right situation and people if you believe it will happen. Aside from this I would say my 2 NPLH books being published, having NPLH considered as one of the 6 major incantation of current Holmes adaptions in the Great Sherlock Holmes Debate 4...oh and having Mike Archer and I being inducted as the definitive Web Sherlock Holmes and Dr Watson by Howard Ostrom is also a major highlight.
How did your excellent video reviews come into being?
Initially a stop gap filler between NPLH Episodes just to have content coming out between episodes, I had a few pastiche books and figured I would re-read them and pick out points of interest and analyze them measured against the Canon. I honestly did not think I would get the reaction I got or if anyone would even watch them but the response to my first one ( West End Horror) was rather overwhelming and people urged me to do more...so I did!
Are you more interested in particular genres or sub-genres of Holmesian pasticiche?
I think I enjoy the novels best (feature length stories) . I particularly enjoy ones that have a relatively traditional grounding and emphasize humour and the friendship of Holmes and Watson - your own Lyme Regis series is a good example of this David!  Charlotte Anne Walters recently said in her Great Debate 4 Presentation on Holmes Saturation on film a lovely thing about how at the end of the day its the friendship of Holmes and Watson we watch for and not the crime. I have to say I agree with this notion.
You are, I believe, a committed Christian, how does that inform or drive your life? 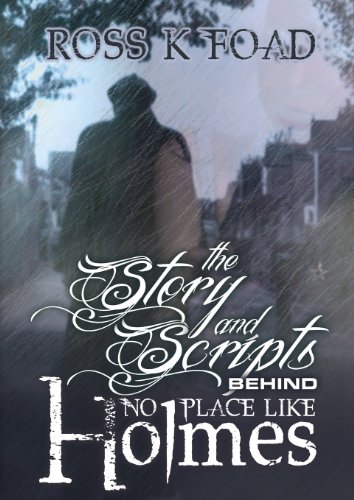 I think this goes back to what I was saying about the my belief in the law of attraction, Matthew 21.22
If you believe, you will receive whatever you ask for in prayer. Everything I have asked for and truely believed would be achievable I have thus worked hard for (must stress this part...it doesnt work by sitting around doing nothing!)  and achieved so.
And now we have, Ross K Foad..author, with two books out. Tell us about them.
The Story and Scripts Behind NPLH contains 4 full length episode scripts plus a few of the shorts/sketches scripts  plus contains a little of the back history from 2009-2012 on the formation of the show and how it came to be where it is today, I am very proud of the fact that it is the first Web Series to ever have a script book come off the back off it! The other one Holmes in Time For Christmas is a novel adaption based on the 2010 NPLH Christmas Special of the same name but I have been able to pad out and explore character relationships further, it also is unique in the sense it tells the story from 3 points of view - Mycroft, Irene Alder and Watson, it was fun to swap between them and create different voices and having to approach the story from an angle of people who are poles apart in their attitude.
And through all this you have kept your youthful good looks. Do you have a picture in the attic??
Haha bless you David oh go on then.... this is from the 1st time we appeared in the paper launching the Sam in 2003. Whats concerning is I still have that jumper...I can still wear that jumper.. I dont know what that says about me..hmm.. 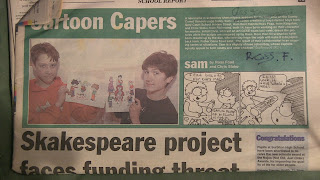 Enjoyed this interview very much. I admire Ross's talent, scope and his energy! He is a treasure for Holmes fans.