'The Amateur Executioner' is a collaboration between two noted Holmes writers, Dan Andriacco and Kieran McMullen. I am never quite sure how these collaborations work, but I suspect they weren't thrown into a locked room together and told not to come out until they had completed the book. I am involved in a collaboration myself (the ever impending 'Scarborough Affair') which chiefly consists of me sitting quietly as my partner does all the writing, but I digress.

Enoch Hale, a Boston bred reporter is one of the first on the scene of an apparent suicide, but things 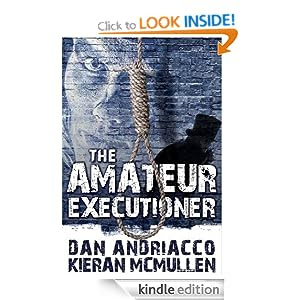 are not what they seem. This is the latest in a series of murders and as the dogged Hale sets out to both cover these crimes and uncover the killer he gets a little help along the way from an assortment of well known folk; Alfred Hitchcock, WB Yeats, TS Eliot etc.....and Sherlock Holmes! The blending of real characters, real history with fictional characters and fictional history is very well accomplished and at no time does the insertion of these 'guest stars' overshadow the very well thought out and exciting plot. There may not be a major part for Holmes to play, but his 'fingerprints' are all over the plot and you do gain the impression that this novel could only have been written by a Holmesian, or in this case, two Holmesians. It is a very enjoyable read, fast paced and undoubtedly fun. You see, collaborations can work. And work well.

The Amateur Executioner  is available from all good bookstores including in the USA Amazon, Barnes and Noble, in the UK Amazon, Waterstones,  and for everywhere else Book Depository who offer free worldwide delivery. In ebook format there is Kindle,  iPad and Kobo 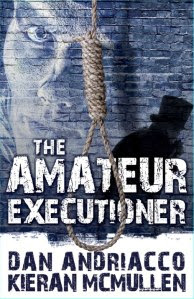 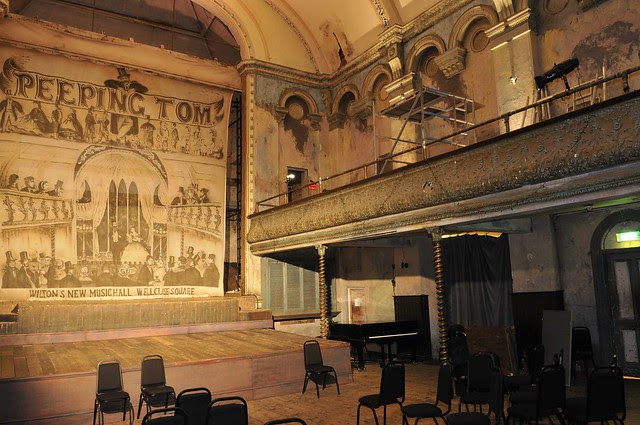 Dan Andriacco discovered Sir Arthur Conan Doyle's original Sherlock Holmes stories at about the age of nine. Not long after, he became acquainted with such greats of the Golden Age of detective fiction as Agatha Christie, Ellery Queen, Rex Stout, John Dickson Carr, Erle Stanley Gardner, and many more.  He has been a member of the Tankerville Club, a Cincinnati-based scion society of the Baker Street Irregulars, since 1981. That connection is reflected in many ways in his book Baker Street Beat: An Eclectic Collection of Sherlockian Scribblings. Andriacco, known to friends as "Doctor Dan," holds a Doctor of Ministry degree from Columbia Theological Seminary in Georgia. He was born in 1952 in Cincinnati, Ohio, where he lives with his wife, Ann. They have three adult children and four grandchildren. http://bakerstreetbeat.blogspot.co.uk/

Kieran on himself: I have been a lifelong Holmes fan, a competitive shooter and a Civil War cannon enthusiast. We’ve raised horses and Irish Wolfhounds and lived on a small farm in Rush Springs, Oklahoma for 29 years. Rush Springs is the Watermelon Capital (at least of Oklahoma) and has about the finest people you want to meet. Helen (his wife who he met in 1982) and I spent 20 years on the Acme Fire Department (Yes, like where Wylee Coyote gets his dynamite) and were in law enforcement for about 12 years. I’m now able to follow my other passions, Irish History and the Holmes Stories as well as participate in a number of civic organizations. For many years I was on the Board of Directors of the US Field Artillery Association, and ran live fire Civil War Cannon competitions at the home of the Field Artillery, Fort Sill, Oklahoma. I am currently active with the Knights of Columbus (surprise!), The local VFW and the American Legion where we now live, just north of Darien, Georgia.  At some point in all this I love to find time to write. http://kieranmcmullen.com/